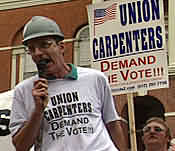 "We must have the right to elect the officers that directly affect the working lives of each one of us."
-Mike Cramer, Local 33, United Brotherhood of Carpenters & Joiners

"If you talk about democracy in the workplace, the people who have less of that than anybody are non-union workers."
-Cecil Roberts, President, United Mineworkers of America

"During that campaign, all sorts of things happened. I got several death threats. They marched in guys with ice picks and tried to beat me up."
– Mark Rosenthal, President, Local 983 (Motor Vehicle Operators,)
District 37, AFSCME

"You have to have a clean, honest labor movement, and it has to be a labor movement where the members feel that it's theirs, that they control it and they're inspired to take that message to their families, their friends, and their neighbors."
– Carl Biers, Executive Director, Association for Union Democracy

Labor unions played major roles in the history and politics of the 20th Century. They were a part of the New Deal-Fair Deal coalition that enacted Social Security and the G.I. bill in the US, and they played a similar role in Canada and overseas. Once, unionized workers were paid substantially more in wages and benefits than non-union workers; but now the margin is smaller. Are unions now an endangered social institution? Or can unions revive?

Struggling Unions, Merrimack's newest video, examines this question by reporting on a new generation of leaders struggling to reform and revitalize their unions. This 35-minute video has case studies of three unions undergoing dramatic change: the Carpenters union, the Teamsters, and District 37 of AFSCME, the large New York City municipal union. Interviews with union leaders, union reformers, and labor experts tie the struggles in these three unions to the broader effort to reverse the long-term decline in union membership.

"Struggling Unions raises provocative questions for students of labor history and for labor activists and offers a balanced array of answers. It poses the central question for labor in our times: why have membership and union power declined so drastically in the last half-century, and what can be done about it?"
--Judy Ancel in Labor History

"In a dramatic fashion, this video describes the struggles for democracy occurring in some key unions and the issues surrounding them."
--George Strauss, Professor of Business Administration Emeritus
University of California at Berkeley

"If you've ever wondered why internal democracy is vital to the future of the labor movement, don't miss this thoughtful and provocative film. Struggling Unions documents the efforts of staunch trade unionists to make their unions open and democratic. The most respected labor experts in the United States and activists from the major sectors of the labor movement speak out for the right of union members to vote in open and free elections for the leaders of their choice. The case studies on which the film is based – the Teamsters, the New England Carpenters union, and New York City's D.C. 37 of the American Federation of State, County, and Municipal Employees – are timely and moving testaments to the courage of rank-and-file and reform leaders who fight to make their unions stronger and more effective organizations for all working people."
--William Kornblum, Professor of Sociology, City University of New York

"This is a very interesting and thought-provoking film which focuses on a subject too often ignored: the importance of the democratic process in unions if they are to fulfill the purpose of collective bargaining to give workers a voice in the decisions which control their working lives." --Clyde W. Summers, Professor of Law, University of Pennsylvania

"Struggling Unions is a fine, thought-provoking presentation of today's ‘state of the union.' It deserves to be seen by many, from students, politicians, and workers to union officials."
--Arthur L. Fox II, attorney, Lobel, Novins & Lamont, Washington, DC